The Battle Beyond Planet X

At the Crossroads of Our World and Theirs…

“Maybe if you see my face, you’ll change your mind about the mission.” 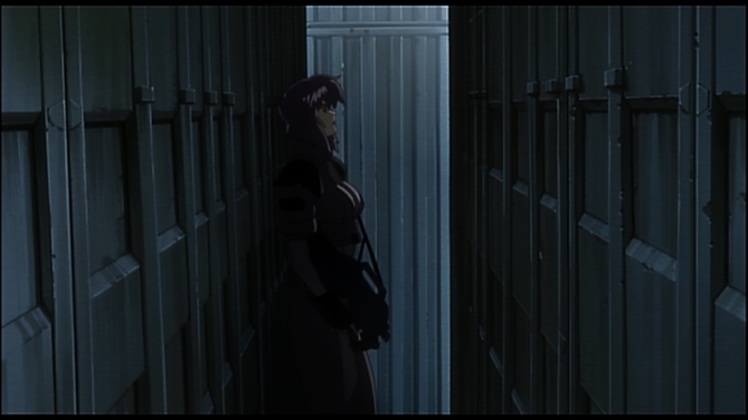 In our penultimate episode, we reach a kind of climax, where the Major and the audience finally understand Kuze’s ultimate aims. But immediately following, we must hard cut to the greater resolution of the situation in Dejima — I suppose that’s the juxtaposition this episode’s edition of the show’s ever-odd title scheme is conveying.

Kuze tells his anti-air team to go on ahead. He’ll take the Jigabachi. More wishful thinking, of course, as the Jigabachi come down and decimate his men. Blood pours through bullet holes in the metal. The Major looks up to see the explosions in the sky, one of which Kuze manages to jump away from like the star of a Michael Bay film. Or John Woo, if you must. 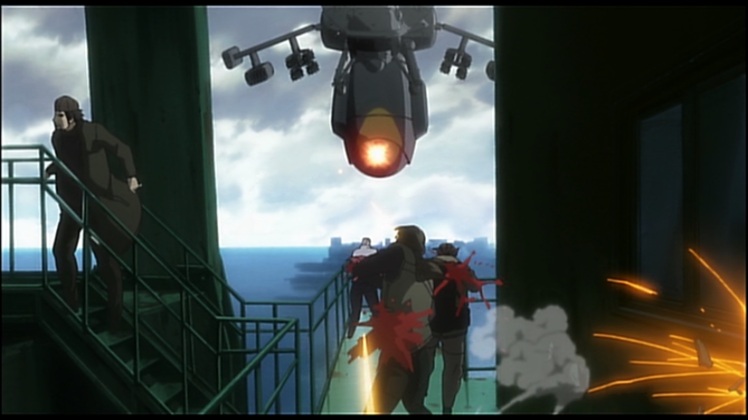 Section 4 and Section 9 are going at it. This is the apotheosis of Ghost in the Shell paramilitary warfare, though brief, and that’s something all too rare, outside of this series. Within, of course, it’s made all the better by the cyberpunk tech edge. Optical camouflage is a matter of course, but what we haven’t had so much of before is either team actually coordinating on formations and tactical routes — Section 9 for the moment sticking to ground level corridors, while Section 4 changes up.

The Chief and Proto work together to secure the room they’re in. Proto reports, slumped over against a podium as he is, that the sentry plane has crashed, most likely shot down. This means they can get through to Dejima now. Nearby, Togusa is on his rescue mission, and takes out some guards. “Sorry guys, national emergency. Sweet dreams.” He takes one of their guns, and opens the door to a surprised-looking Prime Minister. 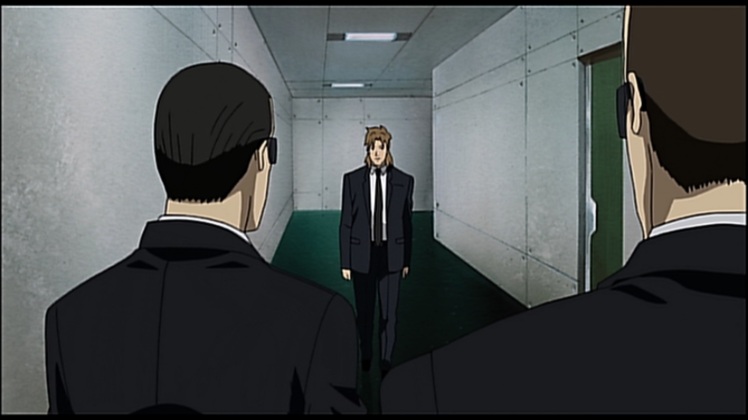 Gouda too learns of the sentry plane’s fate. “So. He’s trying to reunite the refugees? Start the airstrikes.” It must be nice to essentially wage war like this remotely. Just as war influences Call of Duty and video-games about war, though filtering out certain psychological stimulants, one day war might be influenced by such technology the very same. “Is anyone here?” Yes, Gouda. “I’d like you to mail this letter. Send it express.”

The Major checks in with the Tachikoma, asks where Batou is. Only bad news there, Major. And worse news: that submarine, yo. She gets the visual feed, and Batou sees it too. “What the fuck? Why’d we even bother bringing this shit?” he shouts, rattling the plutonium. The Major tells him to get to the bridge. They’re planning on launching before the inspection team arrives.” We got heat, Batou tells her. Maybe the Section 4 Rangers. 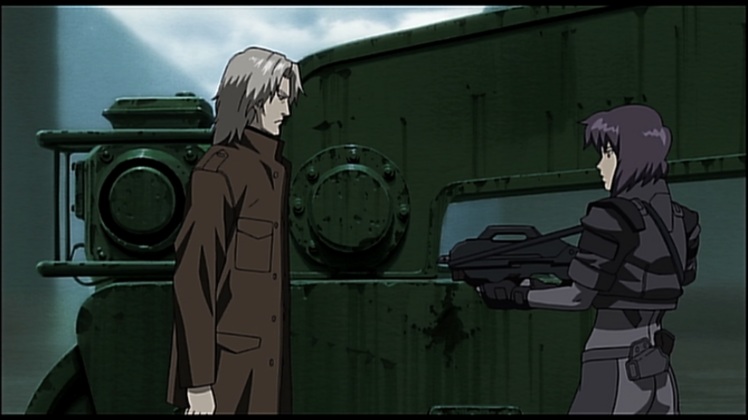 Kuze rises, and the Major confronts him, laser-sighting his impeccable face or body. “How many times have we met?” he asks, unshaken. “Is this the third or fourth? Why do you keep following me?” The Major tells him to come with her, or else there’ll be massive casualties… and they’ll blame you. It’s a nuke. “What?” His eyes narrow. “Who are you?”

The Tachikoma get a read on the missile. It’s the kind that goes up into space. In my field, we call them astronaukes. Apparently, after a roundtrip to the stratosphere, it can’t be tracked. But this will wipe out the military forces in Nagasaki! Why don’t we circulate a photo all around the world? Hell, that doesn’t prove anything anymore… 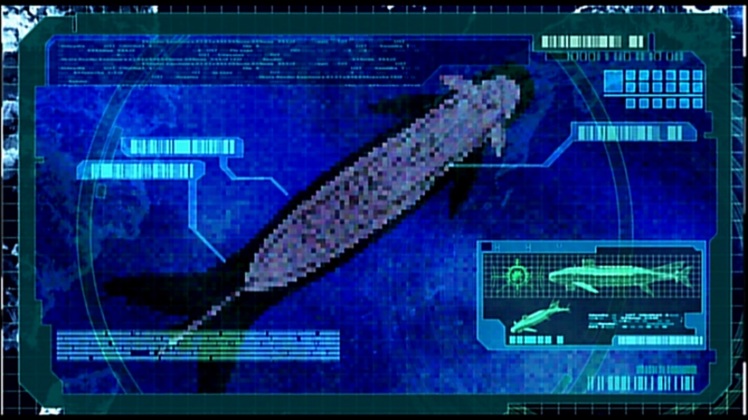 Batou realizes Section 4 has caught up to them, having switched formations. He asks a Tachikoma if it can decrypt their signal and run a back-hack. He shoots a pipe, floods the corridor. The Tachikoma warn him about the impending firebombing — aegis missiles. The agents prep for the big showdown, get into position.

The missiles start falling in Dejima. The Major cuts him a deal, of sorts. “We’ll surrender to the SDA together. I’ll drag you there myself if I have to.” Kuze advises they head to the bridge. He wants to explain the situation to the refugees. The Major radios the Tachikoma, something about missile trajectory, and in mid-sentence, is enveloped in the folds of shattering earth beneath her. She and Kuze fall in.

Ishikawa sees the news report, that in response to the refugee uprising… someone… has begun to attack. The Tachikoma finally rendezvouses with him. Meanwhile, Togusa is escorting the Prime Minister and her assistant on a stealth mission — no, no, not this hall. 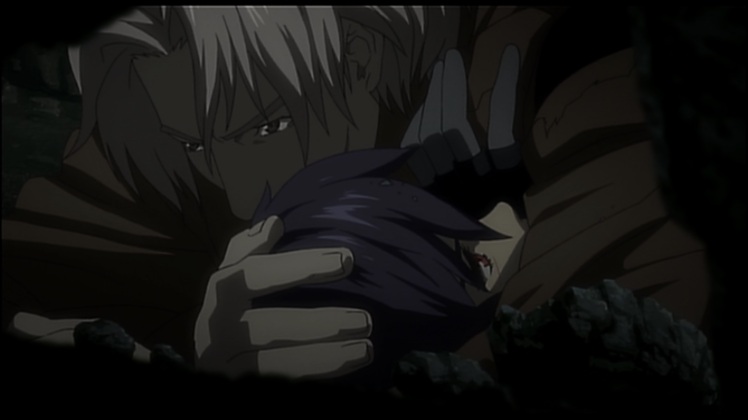 Underground, the Major ‘wakes up,’ or reboots, finds Kuze cradling her head. She checks in with the Tachikoma. Kuze explores their surroundings — looks like they’re sealed in. What may have broken ground was a cargo container, one devoted entirely to apples, which are strewn about. With some newfound time on her hands, the Major asks Kuze if he’s linked up with the refugees. He reports that they’re mostly in a panic due to the airstrike. What group do you work for? “The police. We’ve been trailing you to expose a plot within the government to drive out the refugees.” Why did you bring the plutonium? “We knew you hadn’t gotten it, so we stole it from Fukuoka to use as evidence. But they’re plan unfolded faster. Nobody knew they’d cut a deal with the Empire.”

So, Kuze says. You uh… given up on the ol’ plan of me turning myself in? He goes to lift the convenient I-beam on her leg as she goes for the pistol at the small of her back. He adds, that anyone who wants to link with him and see what’s up can do so at any time. I intend to carry out my revolution. When you said there’d be a nuke, that made up my mind. “What sort of revolution?” 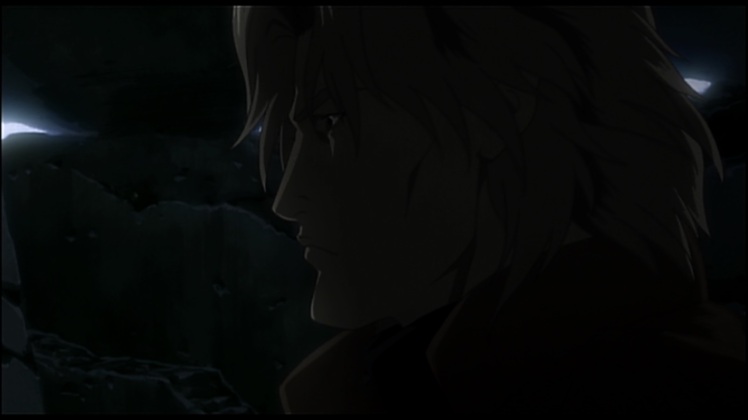 Batou asks the Tachikoma how the back-hack is coming. They’re always checking in with those Tachikoma. But the helpful robots are having a hard time — Section 4 is changing their encryption at random, based on prime numbers! Talk about fighting on multiple fronts. It’s like Saito and his image curtains. Back in my day you just fired a weapon, usually at the ground — we didn’t have your fancy metal lungs to protect us from lung failure. They exchange fire, and Section 9 moves out.

The Major continues her barrage, but because she’s momentarily disabled, as she was with sexy doctor and the Laughing Man, it’s of questions. But it’s always some kind of barrage. “How did you become leader, and how did you break free of the virus?” After I joined forces with the refugees, I detected a disparity in ideology between theirs and mine. That’s what broke the virus. Oh, I didn’t realize we had a virusologist in the subterranean nook. The reason he wandered Asia after the war was to make up his mind. And soon he came upon his idea for the revolution: the superstructure. To fuse them to the net. 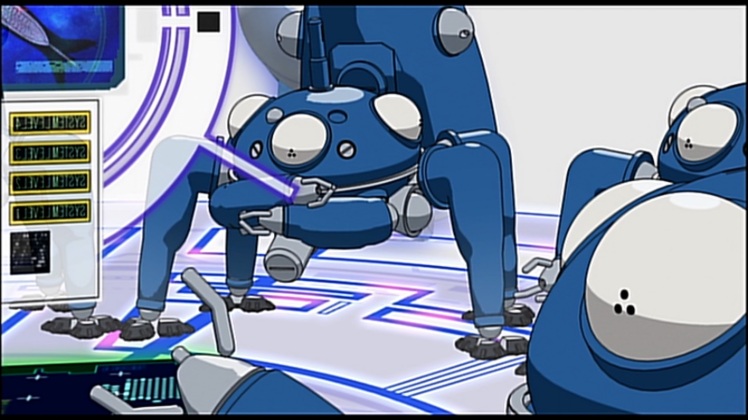 The Tachikoma are as we left them: chattering. I think I’ll miss them. Hold me. “Any way we can hack that submarine?” Impossible. In operations, they’re in a standalone state. “What about backhacking a crewman?” Nothing seems like it’s gonna work. Hopefully Kayabuki has something. She meets with the Chief, tells him she’ll try to cancel the nuclear strike. “It all hinges on whether or not they understand the situation,” the Chief mentions.

In a musically interesting moment, an instrumental, string version of “Run Rabbit Junk,” plays as Section 4 surrounds Section 9 in another courtyard. Batou’s ready to put down the plutonium and deactivate the camouflage. The Tachikoma pings in: the back-hack is in place. He tells his men that as soon as he puts it down, to get clear, into cover. And the trick works. Section 4 is momentarily fooled, and Batou stands alone. He says, “Maybe if you see my face, you’ll change your mind about the mission.” Suzabe’s shocked. Those eyes… You’re a ranger? And the Section 4 members flip up their visors to see — they’ve all got the Batou eyes. That’s day one of Ranger academy. If your body happens to reject the cyber-eyes, you wash right out. 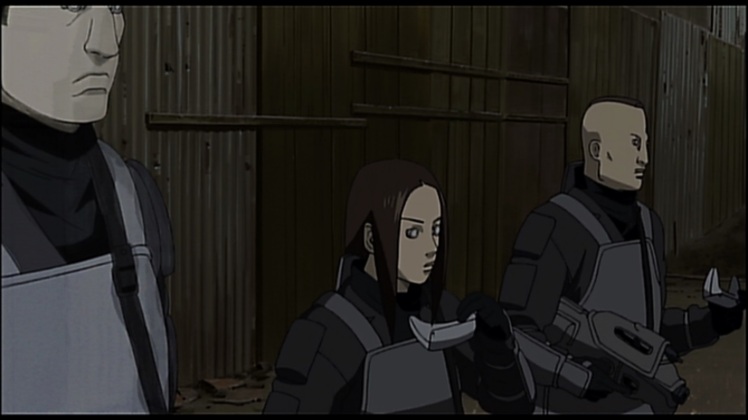 “The structure was corrupt,” Kuze says. “People took no responsibility for anything.” That’s what disillusioned him the most. “When people fell no sense of responsibility … My revolution, it’s also revenge. I’ve had this prosthetic body from the start.” Always dreamed of being in the net. The refugees gave him reason to live. They said they could see his ghost in his face, and this spurred the thought, that maybe body and mind were separable.

He’ll grasp the refugees’ memories and take them into the net, and kind of forced evolution. They’ll lose their bodies, leave them dropped all over Dejima. The Major asks what will happen to their individuality. He doesn’t know. They may become something new. And people will look up to them… “That’s your revenge. An offer of salvation to those who let you down.” You have a prosthetic body too, he observes. You’ve felt the same way. Will you… come with me? They sit close to each other. Unfortunately, he says, most of the refugees want to go the suicide bomb route, even though that’s taking the easy way out. “I see,” the Major says, and phones Batou. “Batou, I’m gonna try to rescue the refugees using Kuze’s method. Tell the SDA about the nuke. Are you listening?” 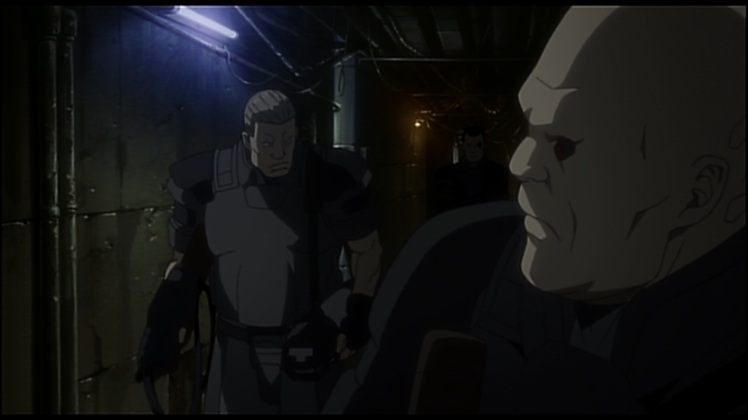 He heard the whole thing. He’s running as hard as he can, cursing her through gritted teeth. “I’m not letting you do this alone!” The rest of Section 9 is in the courtyard with Section 4. I don’t know why, but this scene really touched me. It’s not even trying to either, it’s taking a positively hands-off approach. But seeing the two Sections of soldier now allied, looking around at the refugees, it’s nice. “What are they doing? Looks like they’re praying…” Whatever it is, Suzabe says, let’s get this plutonium to the bridge. The SDA might buy your story if it comes from us.

The military on the bridge confirm the orders. Once the airstrikes are complete, they’ll go in and lock Dejima down for the arms inspectors. And the final image as we move into the last episode is the pixelated sub, lying heavy in the dark blue. That really is the ticking clock that startles these final few episodes into urgency. Sometimes all Ghost in the Shell needs is a little bit of haste — not always, but when it happens, the result is satisfying. 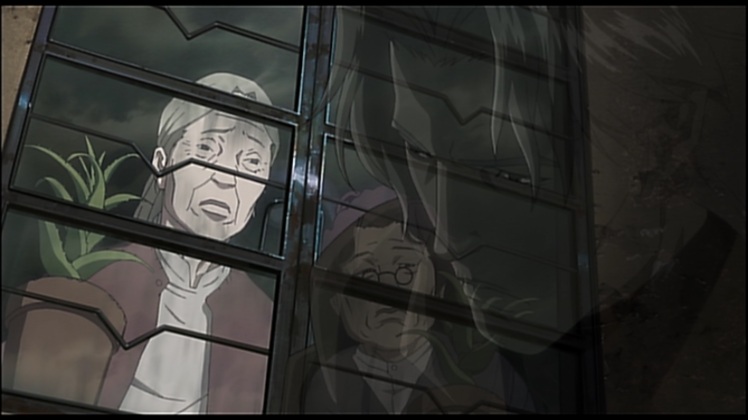 So Kuze, with his plan to ascend to the superstructure, believes in a technology that is possible, just not for him. In Solid State Society, we’ll get a repeat of the Puppeteer storyline, though the Major doesn’t get sucked into the net. Here though, she’s asking the same questions as her 1995 counterpart. Questions about individuality, and what will become of these bodies.

If we remember Saito telling the Tachikoma that it would take more than downloading his memories to bring Yano back, we get the feeling that Kuze’s in for a rough ride. But how quickly the Major joined him — the consummate professional, now beginning the slow ride of disillusionment. This is the job that ends her career at Section 9, and not because she failed — but because she won. 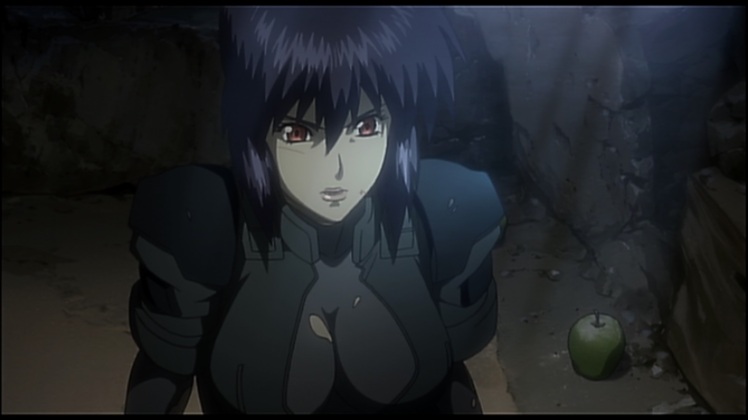 Or send an email to this emale